Light and tender banana nutella muffins are a simple (one bowl!) recipe with a rich, hazelnut surprise inside. They're extra moist and the perfect recipe for kiddos!

I love making muffins. Aside from chocolate chip pudding cookies, I think it's my favorite type of recipe to make. They're pretty fool proof the majority of the time and they can brighten a morning like no other.

Are Banana and Nutella Good Together?

Banana and nutella is an incredible combo. Nutella is a chocolate hazelnut spread and banana just goes so well with chocolate and nuts. I love it so much I made a nutella banana bread too.

How to Make Banana Nutella Muffins

Prefer to watch instead of read?

How can I make my muffins light and fluffy?

My number one tip for light and fluffy muffins is not to overmix the batter. Mix until it's just combined, nothing more. The other way to to not overbake the batter.

"I hate a surprise dollop of Nutella," said no one ever.  If you make this recipe, I’d love for you to give it a star rating ★ below. You can also tag me on Instagram so I can see it! 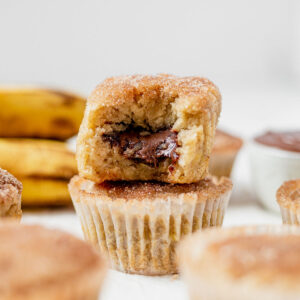