This healthy apple crisp recipe is made with oatmeal, maple syrup and no butter! It's an easy, clean eating and gluten free recipe that's perfect for the fall!

There is something so good about a warm apple crisp during the fall. It makes your house smell delicious and it warms your soul when you take a bite. Bonus points if it's with a big scoop of (dairy free) ice cream!

Any warm baked apples with ice cream is my kind of dessert, so I can't wait to dig into these baked apples too.

How healthy is apple crisp?

Apple crisp is as healthy as the ingredients you put in it. This apple crisp is gluten free, dairy free and refined sugar free! Which means it doesn't contain any ingredients that typically cause inflammation in the body.

The base of the crisp is oatmeal, almond flour and chopped nuts. It's mixed with coconut oil and piled high on top of apples that have been tossed with maple syrup. The apples are sweet enough on their own so you don't need a ton of extra sweetness in this healthy apple crisp recipe.

What apples to use in healthy apple crisp?

Choose an apple that stays firm and crisp when it bakes. I like to get two different apples for my healthy apple crisp: a sweet one and one that's a little tart.

To make this healthy apple crisp, my two favorite apples are: Granny Smith and Honey Crisp.

Who doesn't love a good Honey Crisp apple? We try to pick them at least once a week in the fall at a farm near our house. That means lots of easy healthy apple crisp around here!

Once you pick out your apples you're ready to make the recipe! It's a really easy recipe and pretty tricky to mess up.

How to Make Healthy Apple Crisp

Start by peeling and slicing all of your apples. This part takes the longest, but it's not bad! Get the skin off the apples then slice them very thinly. Place the apple slices in a bowl and mix them together with maple syrup, lemon juice, vanilla and spices.

In a separate bowl, combine the dry ingredients and cut in the room temperature coconut oil to create a crumble texture. Place the apple mixture in a baking dish and top with the crisp. Bake at 400°F for 40 minutes. Serve warm!

I told ya it was easy! Mix it all together and throw it in the oven and you're done! I highly recommend serving with coconut whipped cream or ice cream.

If you make this recipe don't forget to follow me on Instagram and tag me with @what_mollymade so I can see it and feature you! 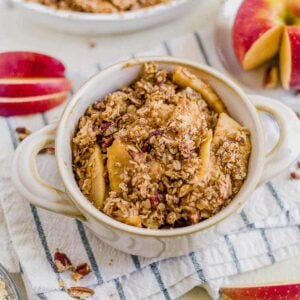