Old fashioned donuts are the best!  They're cake like, filled with pumpkin spice and melt in your mouth. The sour cream and pumpkin puree make for a tasty breakfast recipe. Read more to learn how to make old fashioned pumpkin donuts! 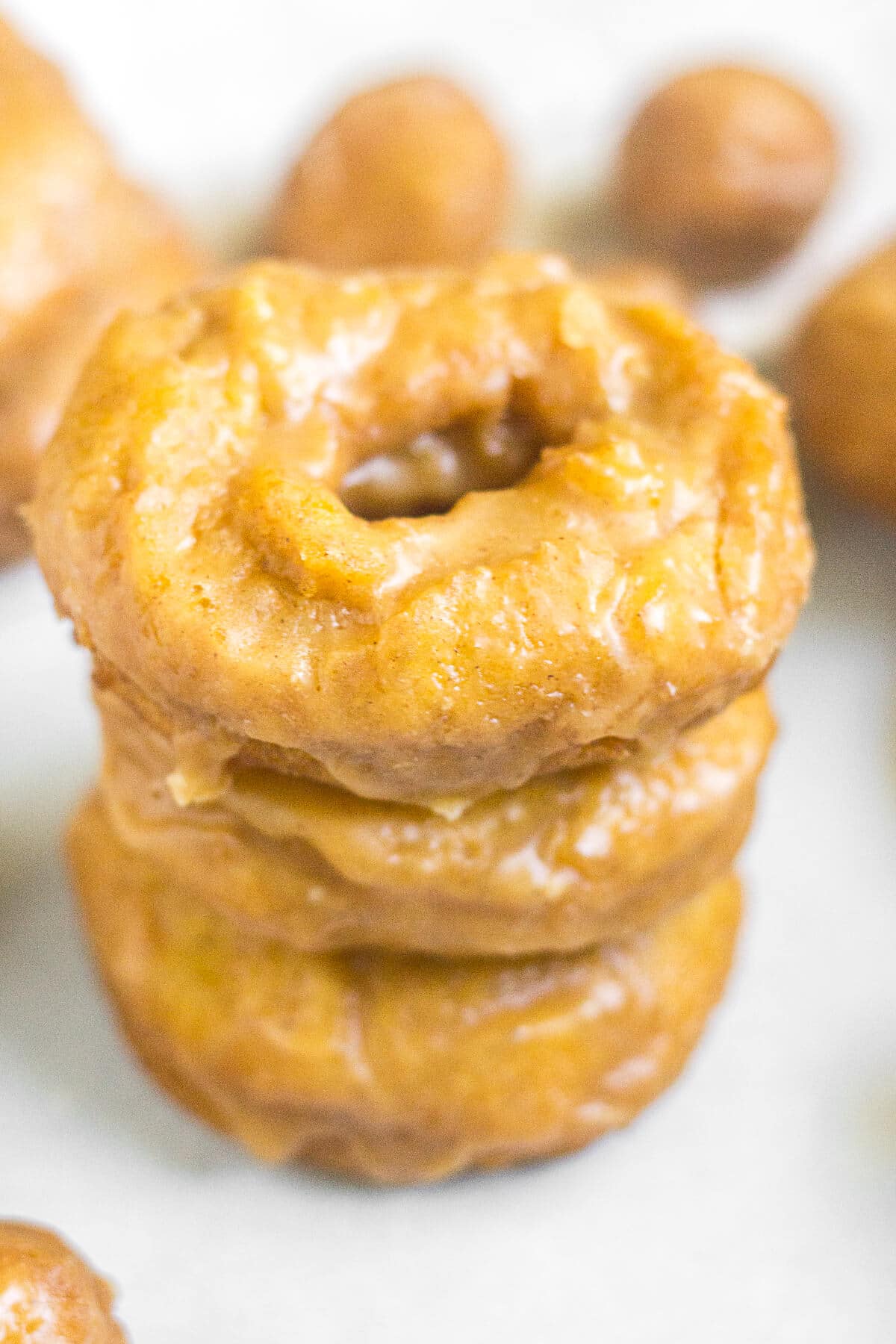 Hey hey ya'll!  Let's pretend we're sitting in my living room, watching Gilmore Girls and drinking cold coffee (because somehow I can't seem to drink it while it's hot!). I would tell you all about my week and my plans for the weekend over some Old Fashioned Pumpkin Donuts.

Who am I kidding? I'm doing this right now by myself, but it would be SO much better if you were here.

So let's just pretend over the internet that you are. Please comment and share what your weekend plans are! I'm dying to hear.

My weekend plans involve a ??. Any guesses what that could be!? 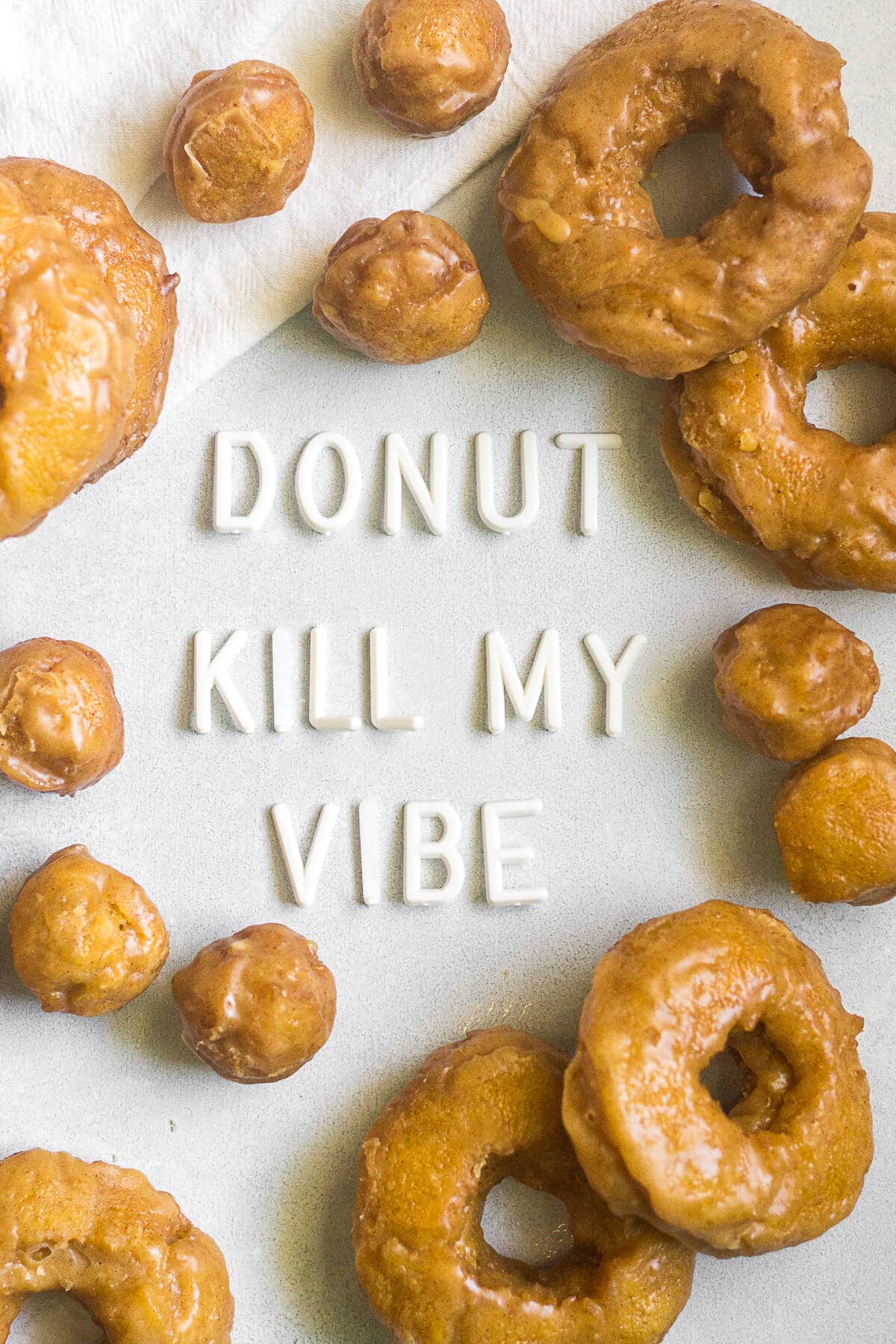 If you're literal like me then you guessed it right. Zach (my fiance) and I are staying in a TREE HOUSE tonight! We're heading an hour north to go hiking and maybe ziplining for the day and then we're staying in the cutest little red treehouse tonight.

There's no internet or cable so we will be off the grid for a solid 24 hours. It's gonna be magical. It has the cutest little sleeping loft and just warms my heart. We live for spontaneous weekends like this!

Some of my other favorite weekend activities include: going to church, taking my friends pictures, wedding planning (these days), working out, watching more Gilmore Girls and experimenting with donut recipes!

This weekend it's tree houses, last weekend it was old fashioned pumpkin donuts. I made brioche donuts a while ago and filled them with lots of cream. But I wanted to test an old fashioned donut because they are some of my favorites! Especially the pumpkin kind! 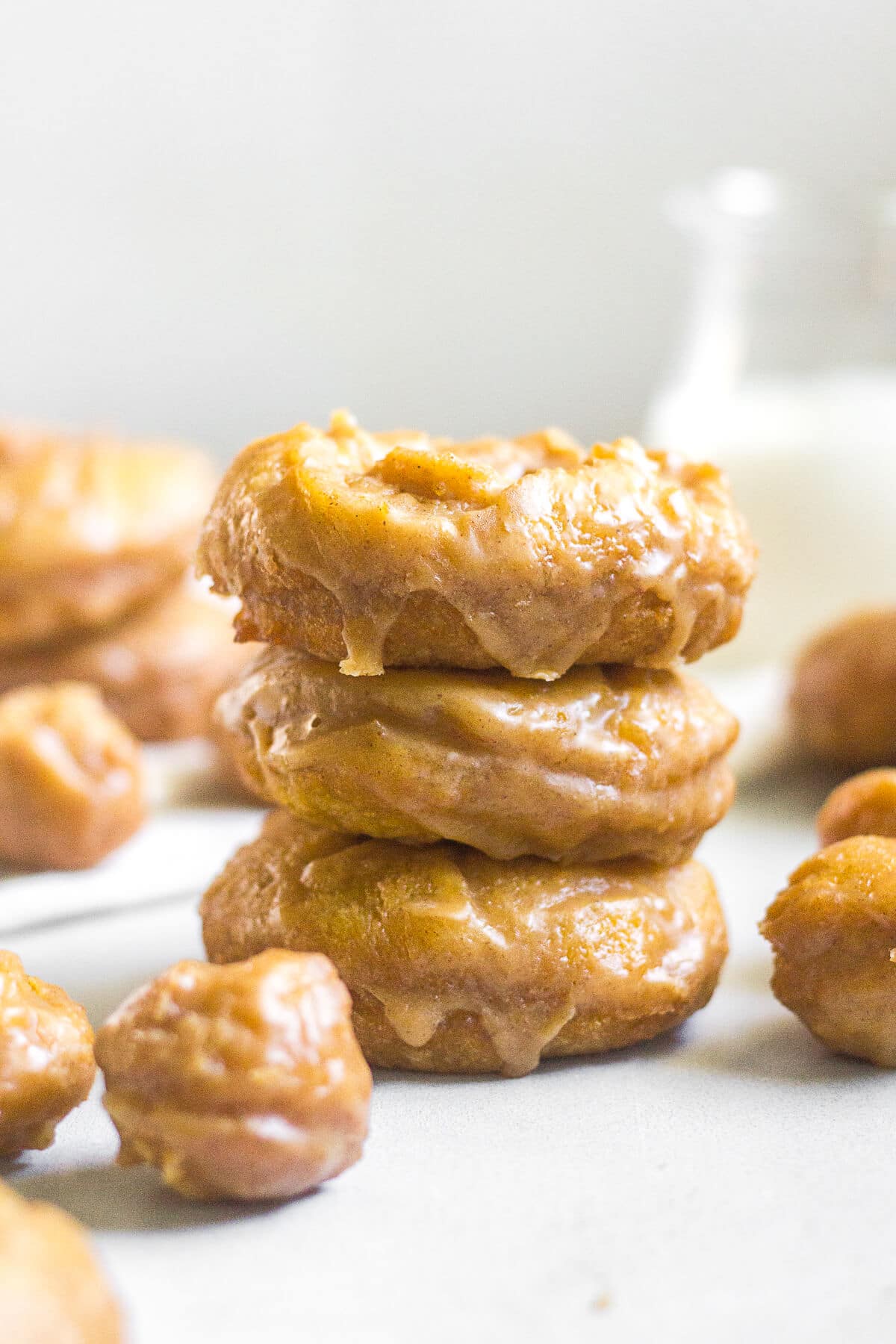 So what makes a donut old fashioned?

Old fashioned donuts aren't old fashioned because they can't get hip with the trends. Because TRUST ME, this recipe is about as hip and tasty as they come.

My best guess is because they were invented circa late 1800s. That's a LONG time ago. But not before the cake donut. Old Fashioned Donuts are a variation of the traditional cake donut.

Old fashioned donuts are traditionally made with sour cream or buttermilk, traditional leaveners (i.e. baking soda) and then fried at a lower temperature than traditional donuts which creates the famous crackly/rough edges.

The other best part about old fashioned donuts is the glaze. It's shiny and hardens around the donut to create almost a glaze-like crust. It's really magical. Scroll down for more on the glaze front. But first we must talk all things donut and how to make them. 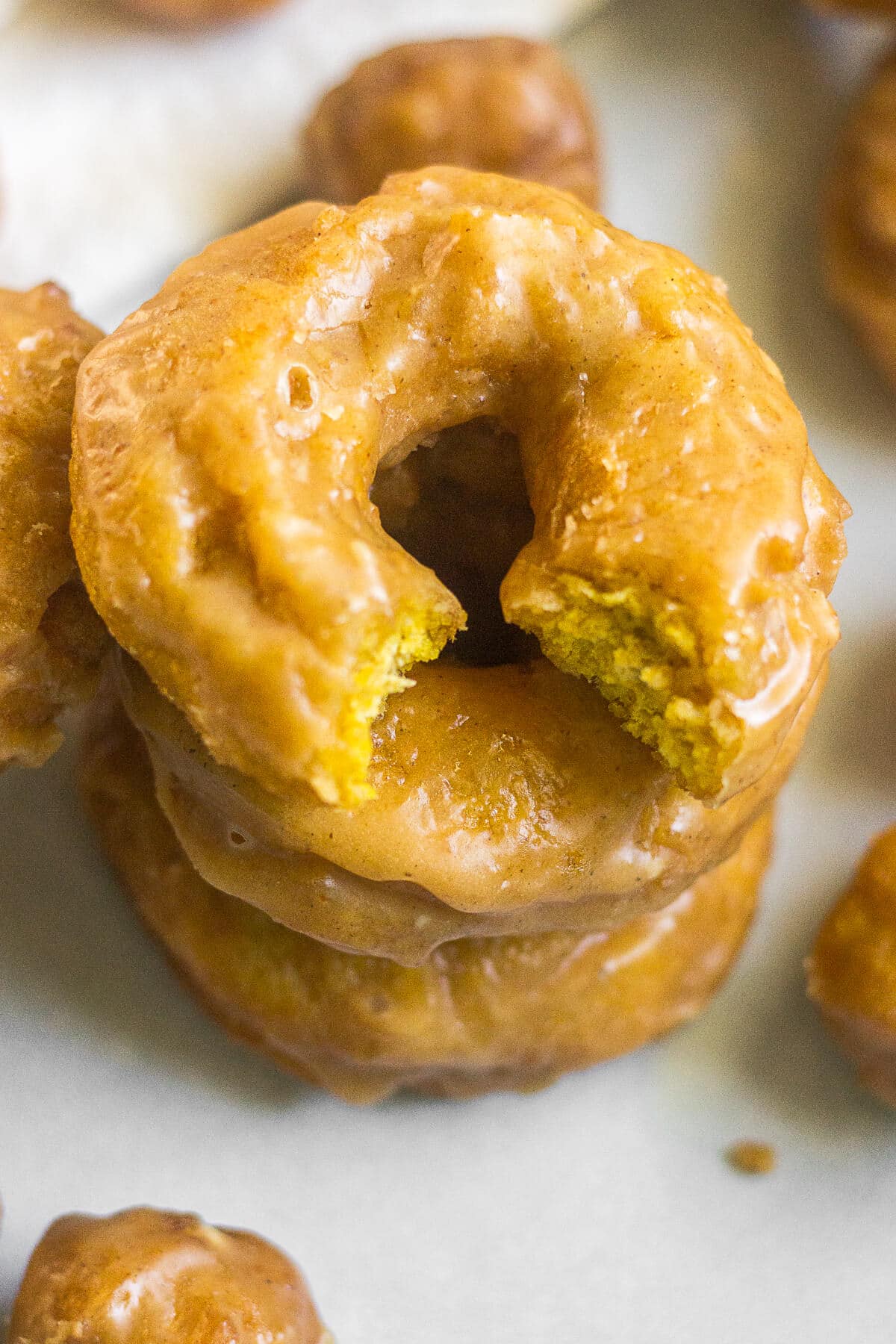 How Do You Make an Old Fashioned Donut?

The best part (in my opinion) about old fashioned donuts is that you don't need to worry about the whole yeast thing. I don't dislike yeast-based recipes, I mean some of the best doughnuts and cinnamon rolls come from it, but it does take patience. 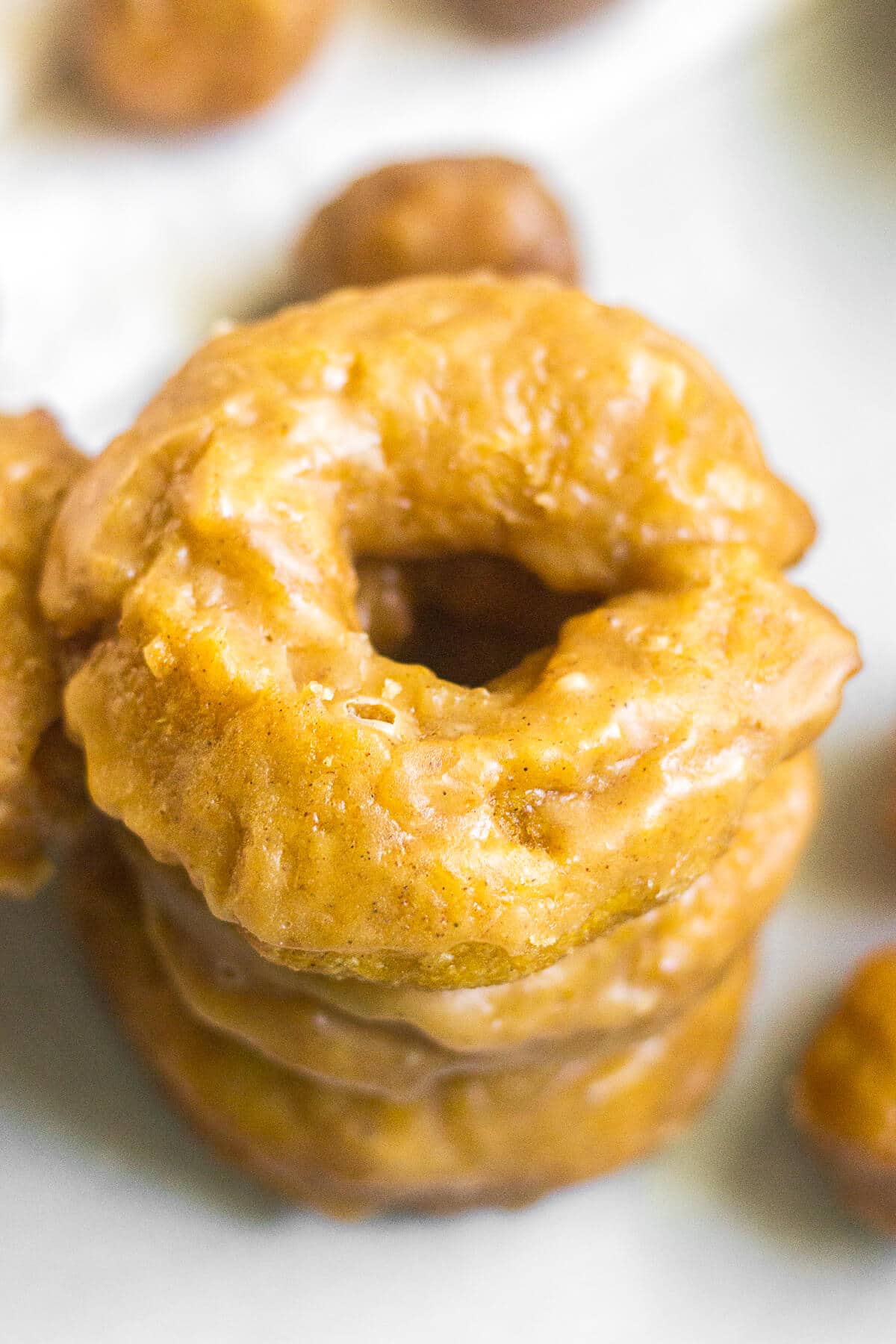 AND LAST BUT NOT LEAST, the key to making these pumpkin donuts a signature old fashioned donut. The glaze!

The key to the glaze is corn syrup. The corn syrup sets hard and shiny just like the donuts you see at the bakery. You can leave it out if you have to but I promise it won't be the same. Mix all the ingredients together and dip the donuts while they're still hot. Allow to cool for 5-10 minutes and the glaze will set up perfectly. 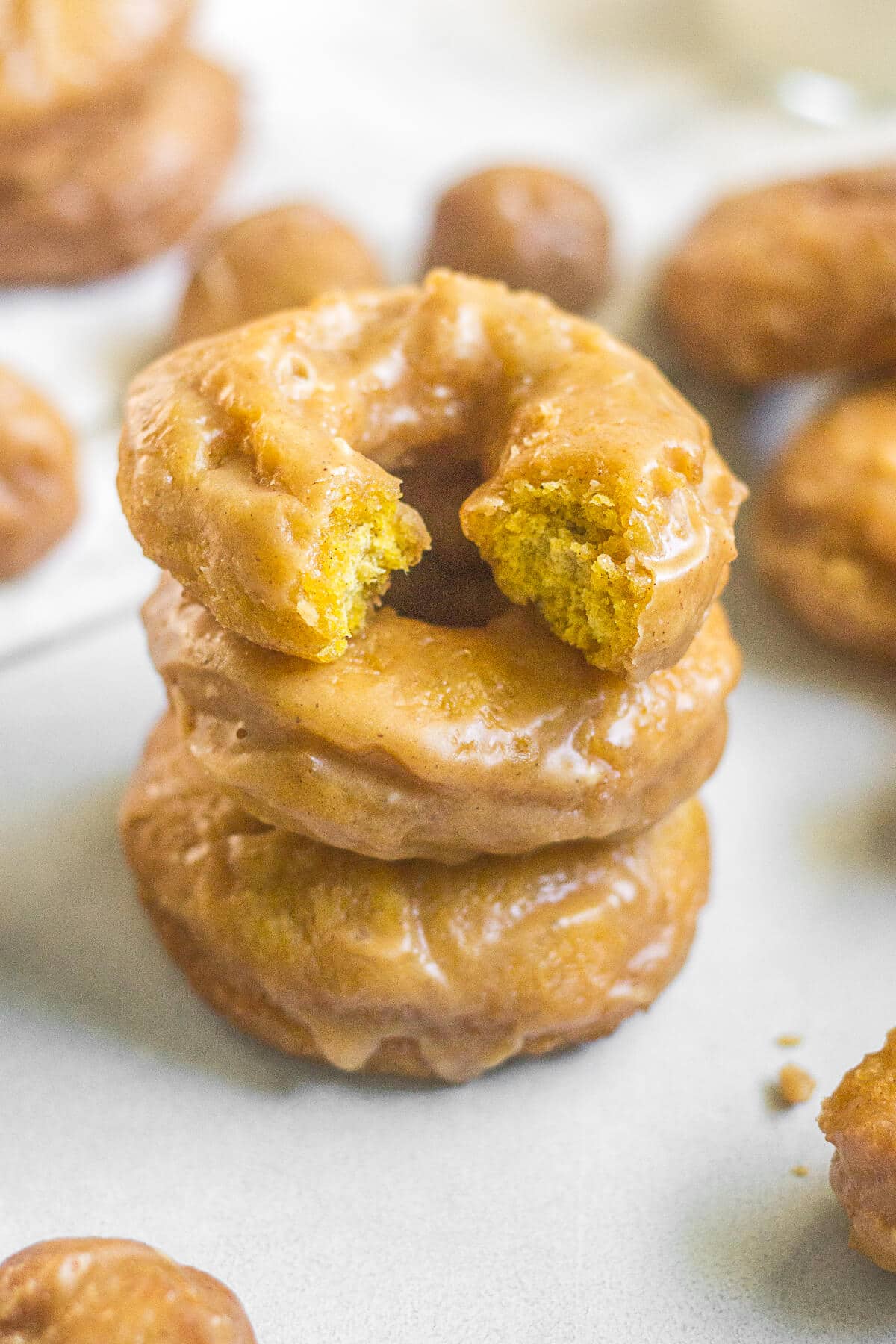 Here are a few of my favorite tools to make these old fashioned pumpkin donuts:

Donuts are more of a special occasion baking project because the dough rising and frying can be a little time consuming and messy, but it is so worth it! If you and your kiddos, friends or significant other want to make them together they're a fun bonding baking project too!

I made a bath while Zach watched and worked on his computer. That's about as close as we're gonna get to baking together and I'll take it any day. 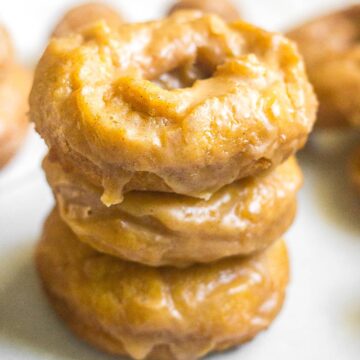