Cream pies have been around for centuries, but it wasn't until he late 1900s when banana went from being an exotic, hard-to-find fruit, to a common grocery store item, that the banana cream pie really took off.

There are four basic components to banana cream pie: crust, fresh bananas, vanilla custard and whipped topping.We're making a plant-based version by keeping this recipe completely dairy-free and even taking it a step further to keep the crust gluten-free.

For the pie crust:

For the banana and vegan pudding:

We love to use a homemade vegan coconut whipped cream. I also love using a store bought vegan whipped topping, like Coco Whip, if you're short on time or making this in advance and want to take the whipped topping with you.

You can make your own coconut whipped cream or use store bought. Here's how to make it quickly. 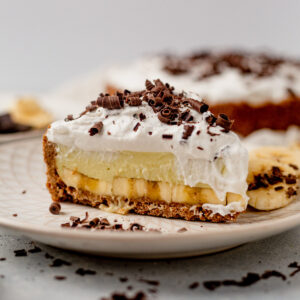