This pear salad with goat cheese features fresh spinach, sliced apples, creamy goat cheese and crunchy pecans. It's great as a side salad or add some protein for a healthy meal.

Reasons to Love this Pear Salad with Goat Cheese

This autumn pear salad is full of fresh ingredients like crispy pomegranate seeds and juicy pears. It's also filled with apples, candied pecans and  goat cheese.

How to Remove Pomegranate Seeds

This pear salad recipe calls for 1/3 cup of fresh pomegranates. A lot of times people can be intimidated by them because the time it can take to remove the seeds from the fruit. Here's how to do it easily two ways!

If you're short on time, use pom wonderful aerils to make life easier.

What Pears are Good for Salads?

There are two pears I recommend for this autumn pear salad. Both are sweet, crispy or juicy and add lots of flavor and texture to this salad.

Make sure to cut the pears in thin slices lengthwise. You could also cut them in small cubes too!

How to Make the Homemade Dressing

Next, add the salt, pepper and honey to a jar with the oil and vinegar. Close the lid tight and shake the dressing well until all of the ingredients are mixed togher.

Once it's mixed, store the salad dressing in the refrigerator until you're ready to use. Be sure to give it another good shake prior to pouring it over the pear salad.

How to Make Pear Salad with Goat Cheese

How to Prep it In Advance

If you're making this recipe in advance for a party or holiday, like Thanksgiving, you can make the dressing and pecans in advance. Add the spinach, apple slices, pear slices, goat cheese and pomegranates to the top and serve with the prepared nuts and dressing.

If you make this recipe, I’d love for you to give it a star rating ★ below. I'd love to hear from you! You can also tag me on Instagram so I can see it! 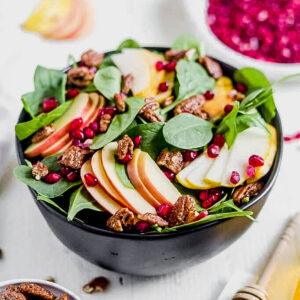 Storage: Store leftover salad (without the dressing) in an airtight container in the fridge for up to 3 days.