Happy Friday, everyone! This post is long overdue. Two trimesters overdue to be exact:) But I thought it was time I share some more info about my pregnancy!

I've been getting a ton of questions about pregnancy and fertility, especially since I have PCOS, so I felt this post might answer some burning questions anyone has. Or if you just feel like staying up to date on what's going on:)

I'm going to be sharing an entire post dedicated to what I did to get my body ready for conception and pregnancy, especially with PCOS, so stay tuned for that! But, I will say this. We got pregnant on the first try. I know that isn't the case for everyone and we are grateful beyond measure for this blessing.

We were in Palm Springs for a trip before Zach started his new job when I was pregnant. I didn't know it at the time, but a few days after we got home I got a positive pregnancy test! I actually messed up the first pregnancy test and got an error so I had to wait a few hours until I had to pee again before I could take another! The anticipation was KILLING me. I didn't tell Zach I was taking it and surprised him when I came out of the bathroom with the test:)

The terrible sickness: I started feeling nauseous around week 6 and it peaked around week 9 and continues to this day. I kept telling myself that it was a good sign that I felt sick, and I knew that, but it didn't make it any easier, TBH. I couldn't even look at pictures of food without wanting to throw up. As a food blogger, that makes it really hard to do my job. I had to take almost a month and a half off of working.

Food aversions/cravings: I didn't really have any cravings at all. In fact, the only thing I could really stomach was a bagel. Carbs saved me. Tasteless carbs. Needless to say, I haven't been eating gluten free. I do feel less puffy when I eat GF, but my body has been wanting gluten, and especially dairy, so I've just been listening to that and feeling good about my decisions.

The loneliness was real: Because I felt so sick, I felt like no one understood what I was going through. If I didn't take my prescription I would puke 5 times before 11am. I work from home and so I was the only here all day and I couldn't work so I spent a lot of time on the couch and that started to get really lonely. I struggle with feelings of anger, depression and guilt and it really got to me. Here are some unfiltered thoughts about pregnancy I shared on instagram. Ever since sharing these thoughts I've had so many people reach out and say they've felt the same way. It's made me feel less guilty and like I'm not alone.

I was so exhausted. Around week 9 I hit a peak here too. I was taking multiple naps a day and sleeping twelve hours a night. To make it worse, my morning sickness medicine made me really drowsy. I had to take it twice a day so I was basically sleep walking for 8 weeks!

Body Image: I had mixed emotions about body image. I wasn't in a place physically I wanted to be when we got pregnant so I really struggled with the thought of gaining weight on top of where I was. At the same time, I was so incredibly grateful for what my body was doing. I was in awe that my body was creating a human and amazed that it could. As my stomach grew my clothes stopped fitting, but you couldn't quite tell I was pregnant so I was in a weird limbo. I made the decision to not weigh myself at all and not even look at the scale at the doctor. I know myself well enough to know it's something I would stress over so I decided to set a boundary and just choose to not look. It's been really freeing!

Our gender reveal: Despite feeling very sick and wrestling with the emotional side of pregnancy and the huge change coming, we were still over the moon excited about our growing family. We decided to do the chromosome blood test at 9 1/2 weeks and thank the Lord everything came back normal. We always got to find out the gender at that time! Zach and I took our envelope to the bakery and had a cupcake made with frosting in it. We ate it at the same time and found out WE'RE HAVING A GIRL. I was sure we were having a girl before we found out so I wasn't surprised. We did a mini reveal with some close friends and Zach hit a baseball. We already knew the gender, but it was fun telling everyone else that way! 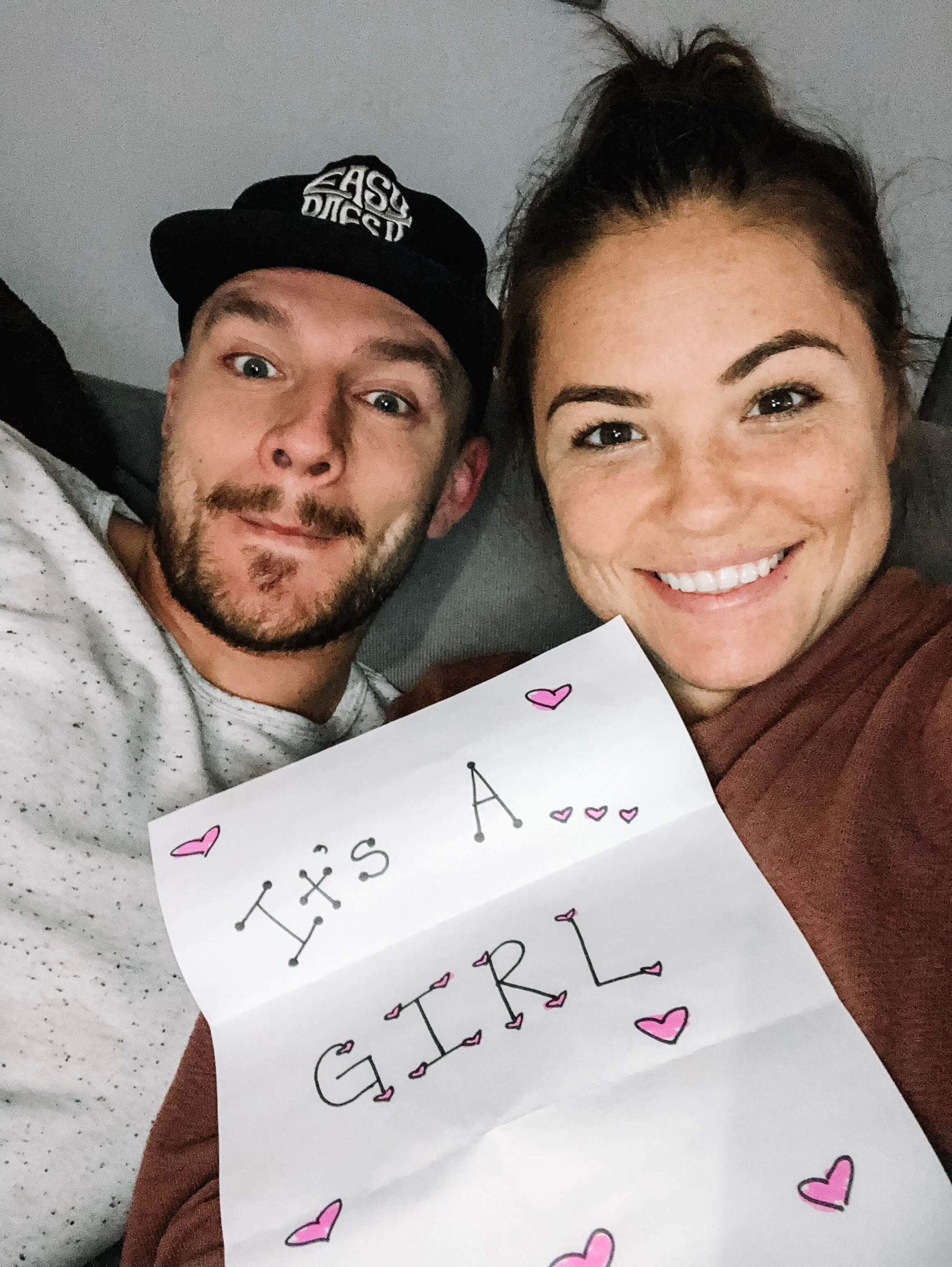 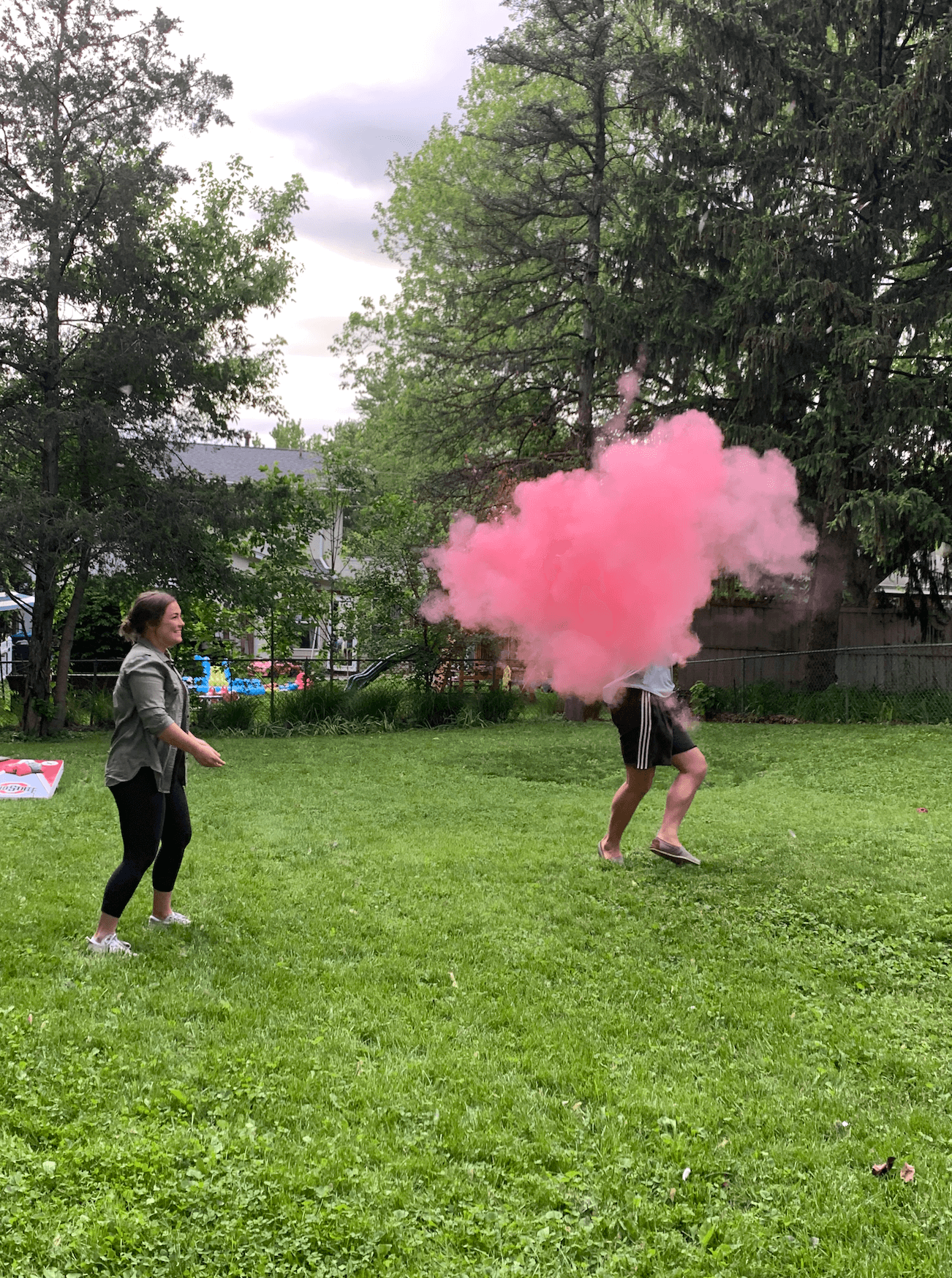 Heading into the 2nd trimester I was really hopeful for starting to feel better. I'd heard so many people tell me the exhaustion and sickness go away after the first trimester and I was so ready for it.

I'm still sick: Unfortunately, I'm still getting sick. It started to lighten up around week 15. I was starting to feel more like myself so I decided to try and not take my medicine around week 19, but unfortunately I still got sick so I started taking it again. I tried again one last time last week (week 25) and the same thing happened. So I guess I still need it! The good thing is when I take it I feel completely normal. And I take it at night so I've been getting a really good night's sleep.

When I started showing: I started noticing around week 16 that I had a tiny bump, but I was really showing by week 20. Now that I'm at the beginning of trimester three it's very obvious that I'm pregnant! I actually love having a baby bump. It's been really fun! My belly is starting to get in the way of every day things like painting my toenails, but I'm not uncomfortable yet.

Our little scare: Around week 17 the doctors thought I might be leaking amniotic fluid. Needless to say, I was terrified. My husband met me at the hospital and they took us back right away and checked everything. Luckily everything was totally normal, thank goodness. Everything came back totally fine and we haven't had a scare since.

The nursery: We started getting the nursery ready! We painted our home office (for the third time) and Zach's mom bought us our dresser and crib from Ikea. I'll definitely be doing a nursery reveal when we're finished, but we're going with a more neutral and bohemian feel. Nothing super girly, but it will probably be obviously we're having a little girl. We don't have much in there, we're waiting for our showers before we starting filling it up!

Our showers: We've got two showers planned and we're so excited! We're doing a couples shower at the end of September that's going to be so fun! We're doing a tailgate for an OSU game at a friends house and it's going to be really relaxed. We've got a more traditional shower planned for early October in my hometown. After that we'll start cleaning, organizing and putting the final touches on the nursery.

We're so excited! After the first trimester sickness and exhaustion I was struggling with not feeling super maternal. We were anticipating getting pregnant would take a little longer because of my PCOS, but we got pregnant right away, so I was a little taken aback and not feeling totally prepared for motherhood. Now that we're 27 weeks in, I'm feeling so excited to meet this little girl! Zach and I can't wait to see what she looks like and grow our family. I can't wait to see Zach become a dad and I know our love and relationship will only grow.

What Feller thinks: I don't think Feller had any clue something was going on in the first trimester, but we really think he knows something is changing. He isn't a very cuddly dog, but lately he has been following me everywhere and laying on me. He's been laying on my stomach a lot! He goes into the nursery and sniffs it out often and just overall we can tell he knows something is up!

Our doula: We met with our doula two weeks ago and we feel so good about this decision. She's an expert in labor and delivery and because we've never done this before, we feel really good about having another expert in the room that is there to be our advocate. She's there for emotional and physical support during labor and to help get the baby in the best position for labor before. She's also a lactation specialist and will be a huge help since I plan to nurse! 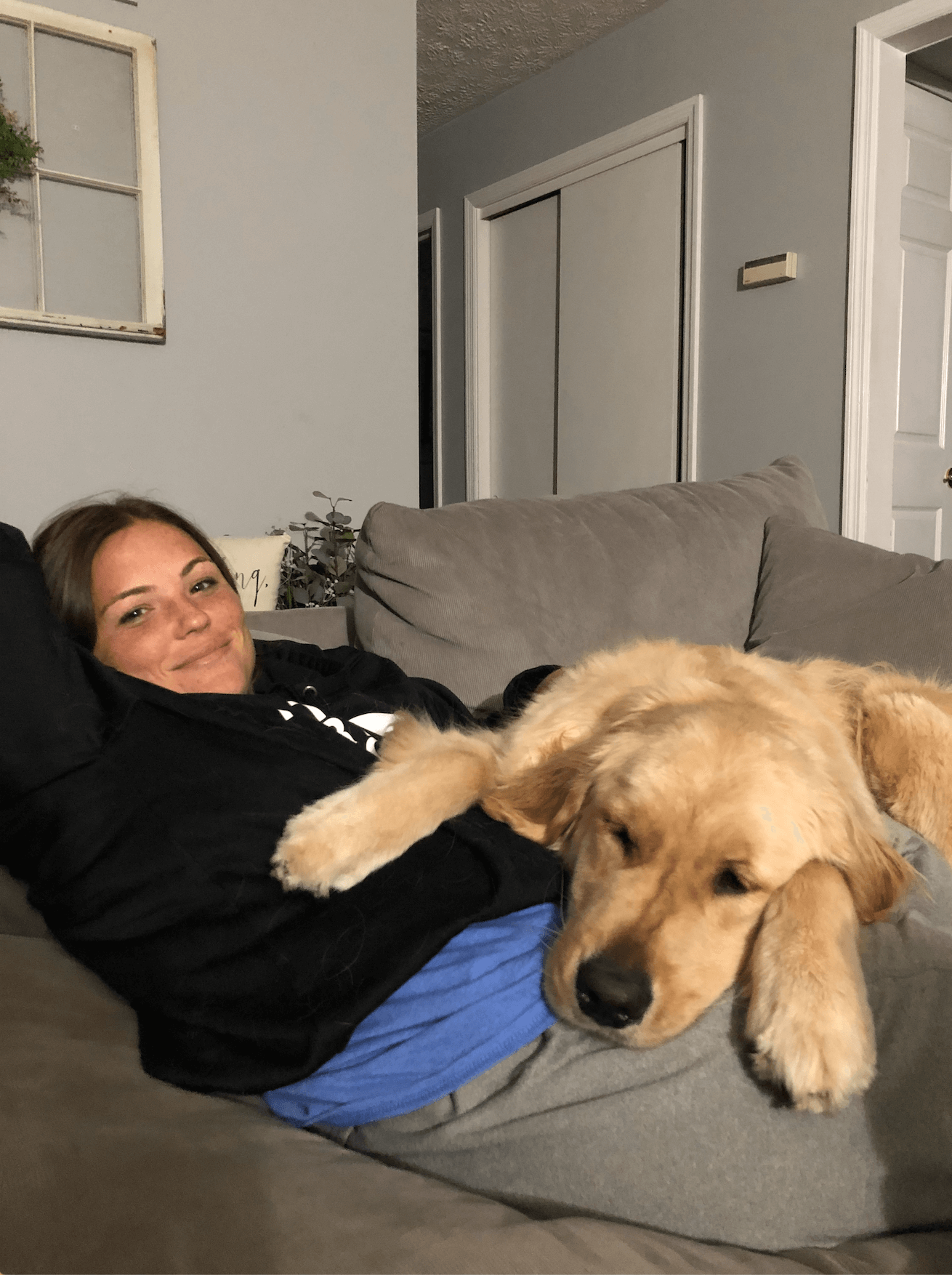 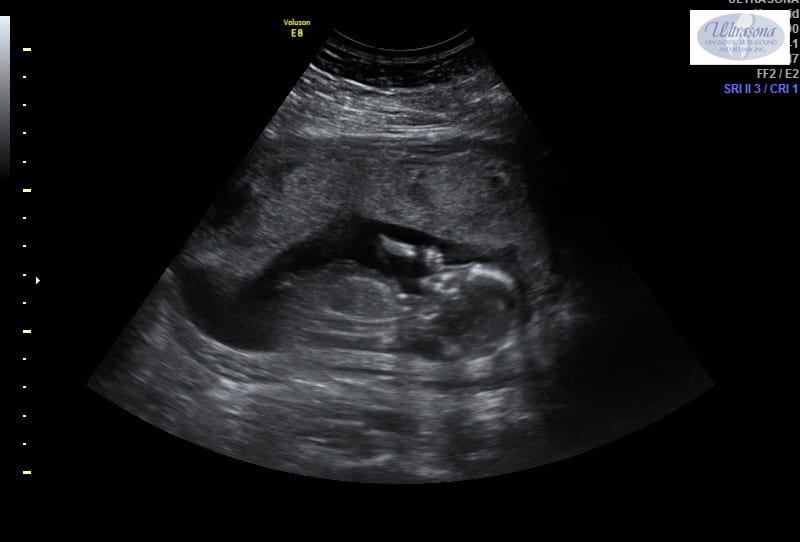 We're really looking forward to this last trimester and really soaking up these last few months of just Zach and I. We'll be going to the doctor more, hopefully finalizing a name, finishing the nursery and reading all the books. This little girl is coming soon and we can't wait!