These soft and gooey pumpkin cinnamon rolls are full of cozy spices and topped with a maple cream cheese frosting. The dough is so extra soft and the pumpkin spice swirled inside makes them the best cinnamon rolls for fall.

Nothing compares to the smell of pumpkin spice wafting through the house on a crisp fall morning. No need for a holiday candle, because these perfect cinnamon rolls are all you need! The dough is soft and the butter and pumpkin spice filling makes them ultra gooey. Our daughter loves the maple frosting! It's the perfect breakfast for Thanksgiving morning, along with our pecan sticky buns or our brussel sprout hash (for a lighter option). And if you're looking for a gluten-free option, these gluten-free cinnamon rolls are extra soft and fluffy.

Don't be intimidated by this pumpkin cinnamon roll recipe. They're just like a classic cinnamon roll and they're no-fuss when it comes to the yeast (more on that below), and we've got an overnight option so you can wake up and bake them. There are a few steps and wait times, but we're breaking them down into easy steps. Here are the basics of these pumpkin cinnamon rolls.

Before you get started: give yourself at least 4-5 hours to make this recipe from start to finish. If that's too much, jump down to the make-ahead instructions to prep them the night before, or freeze them!

Here are the key ingredients for pumpkin cinnamon rolls. The base of the recipe, like all cinnamon rolls, is an enriched dough, which means it's made with fat so they're extra soft. We're sharing noots about each ingredient and a few substitutions. Jump down to the recipe card for exact measurements.

What's the difference? Active dry yeast has a moderate rate of rising while Instant yeast rises faster. They can be used interchangeably 1:1 in any recipe, it just may take longer for the active dry yeast to rise.

What this looks like in a recipe: If a recipe calls for active dry and you only have instant yeast, then keep an eye on it so it doesn't rise too much. If it calls for Instant and you only have active, give yourself a little extra rise time or use our trick to proof the dough in the oven.

How to know when yeast is activated: a lot of times recipes will call for proofing the yeast in warm milk to "prove" it's alive and working before starting the recipe. You dissolve the yeast in warm milk and sugar and wait 5-10 minutes to see if it's foamy. If not, it's dead and should be tossed. However, if it's a quality brand and it's not expired, this step isn't really necessary because it's almost always active and alive. We're letting the yeast sit in the warm milk and sugar here to help it get going.

How to Make Pumpkin Cinnamon Rolls

Here are the step-by-step instructions, with photos, to show you how to make homemade cinnamon rolls and what they should look like at each stage in the recipe. Jump down to the recipe card for the full recipe and to watch the video to make them with me.

What's the difference between cinnamon rolls and cinnamon buns?

Cinnamon rolls are baked and covered with frosting, while cinnamon buns are baked with a sticky topping and inverted before serving, like our pecan sticky buns.

What is the inside of a cinnamon roll made of?

The gooey swirled filling in a cinnamon roll is made of butter, brown sugar, and cinnamon.

Why do my cinnamon rolls get hard?

This is likely a result of too much flour. Be sure to measure the flour correctly. You've added enough flour to the dough when it's slightly sticky to the touch and it slaps the sides of the bowl while kneading.

What goes well with cinnamon rolls?

As a decadent and sweet breakfast dish, cinnamon rolls always go well with a pumpkin spice latte and a savory dish to balance it out, like a breakfast hash.

Can you over-knead cinnamon roll dough?

Yes, you can overwork the dough (and the gluten), resulting in more tough cinnamon rolls. Knead the dough only until it's just soft and smooth.

Overnight: prepare the pumpkin cinnamon rolls through step 8 then cover them very tightly with plastic wrap and place them in the fridge for 8-12 hours. Do not exceed 16 hours or they will overproof and collapse due to weakened gluten and excess gas in the dough. When you're ready to bake, remove them from the fridge and allow them to sit in a warm dry place for 1-2 hours before baking.

Cover baked cinnamon rolls with plastic wrap at room temperature for up to one day. Transfer them to an airtight container and store them in the fridge for up to 5 days. Follow the instructions above to freeze the dough if needed. 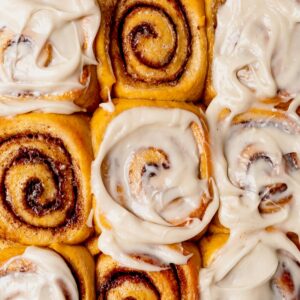 Bread flour: it has more protein and higher hydration capacity, which allows us to put more liquid in the dough, resulting in a super soft roll. The higher protein also helps with a good rise. We tested this recipe with all-purpose flour too and it worked well, so use that if you have it on hand. Instant yeast: I use Red Star quick-rise (or instant) yeast. It can be added to your dough without the need to let it proof (or bloom) and get bubbly. Active dry yeast works well too, but the rise time may take slightly longer. A warm place to rise: The counter should work just fine, but you can put it in a warm oven to speed up the process. Preheat the oven to 150°F then immediately turn the oven off. Wait 2-3 minutes, then place the dough in the bowl inside the oven with the oven door cracked open. Overnight Instructions: follow the steps through step 6 then cover the cinnamon rolls with plastic wrap and place them in the fridge overnight. Allow to sit out at room temperature for 45 minutes in the morning before baking. Freeze the baked cinnamon rolls: freeze baked cinnamon rolls for up to 3 months. Thaw overnight in the fridge and warm in the oven before frosting. Freeze before baking: Follow the steps to make the dough and partially bake the rolls for 10 minutes. Allow them to cool completely then cover tightly and freeze for up to 3 months. Thaw overnight in the fridge and continue baking the next day for 20-25 minutes. Vegan pumpkin cinnamon rolls: replace the egg with another 1/4 cup of pumpkin puree, and use almond milk, vegan butter and vegan cream cheese (like Kyte Hill). Pumpkin pie spice: replace the cinnamon and spices in the filling with 2 tablespoons of pre-made pumpkin pie spice.