With the right ingredients, pecan pie can be made gluten-free and Paleo. It's so delicious and easy to make, you will never eat store-bought again!

I made this chocolate caramel tart a few years back and to this day it's one of the most popular recipes on my site. Every time I post it on instagram, everyone loves it!

This paleo pecan pie is made with a salted caramel pecan pie filling on the top. The rich chocolate ganache underneath the gooey and crunchy pecan topping makes the best flavor and texture. No one will know it's completely free of grains.

How to you make a sugar free pecan pie

Is pecan pie really bad for you?

In my opinion, I wouldn't say traditional pecan pie is the greatest for you. But I'm also a believer in balance. Which is why I like to indulge in paleo pecan pie! It tastes just as great as traditional pecan pie, but it doesn't have the refined sugar, which can cause inflammation.

How to make paleo pecan pie

How to make this paleo pecan pie crust:

This paleo pecan pie crust is a little different than traditional paleo pie crusts. I find traditional pie crusts tend to be tedious and time consuming so I wanted to create a crust that is super easy to make and only takes a few minutes too.

Start by pulsing together the coconut flakes, coconut flour, almond flour and sea salt in the bowl of a food processor. Next, add melted coconut oil and maple syrup then pulse until completely combined and dough starts to form.

Press the crust into the bottom and sides of a tart pan and place in the freezer until you finish the chocolate layer.

This paleo pecan pie is so rich and it will be the perfect addition to your Thanksgiving spread! I can't wait for you to make it! 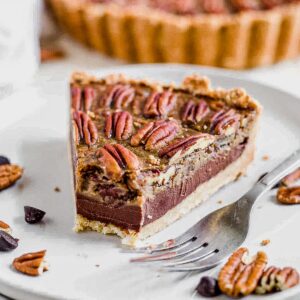