This pumpkin cobbler recipe is a fall and Thanksgiving dessert filled with flavor. It's gluten free and dairy free, filled with pumpkin spice and topped with pecans. And it's easy to make! 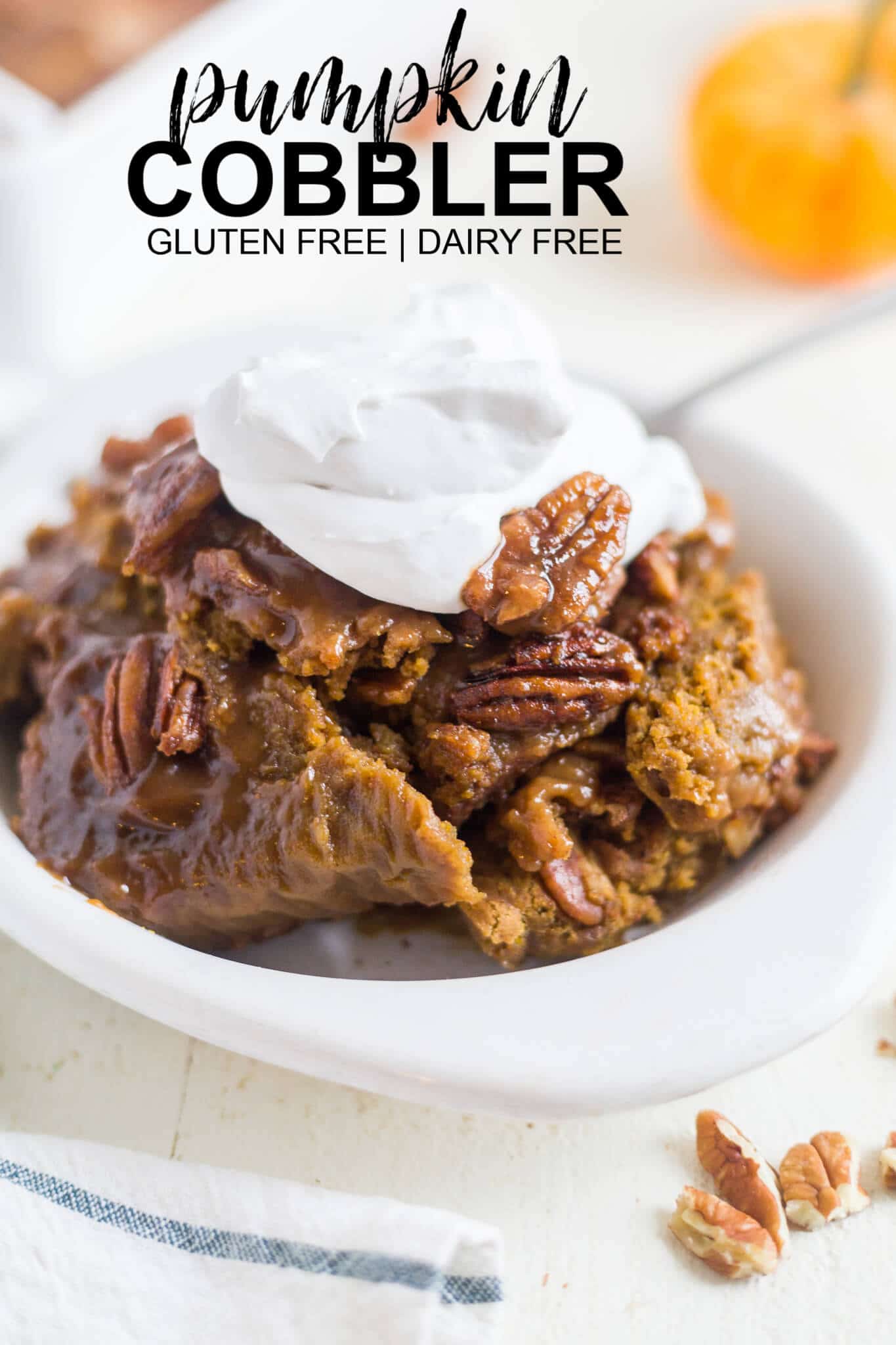 Last year I made this pumpkin snickerdoodle cobbler, so this year I knew I wanted to make a healthy version. I decided it would be gluten free, dairy free and refined sugar free and that's exactly what this recipe is!

Though it isn't filled with gluten and dairy, it is filled with pumpkin spice and flavor. It's the perfect dessert recipe for Thanksgiving! 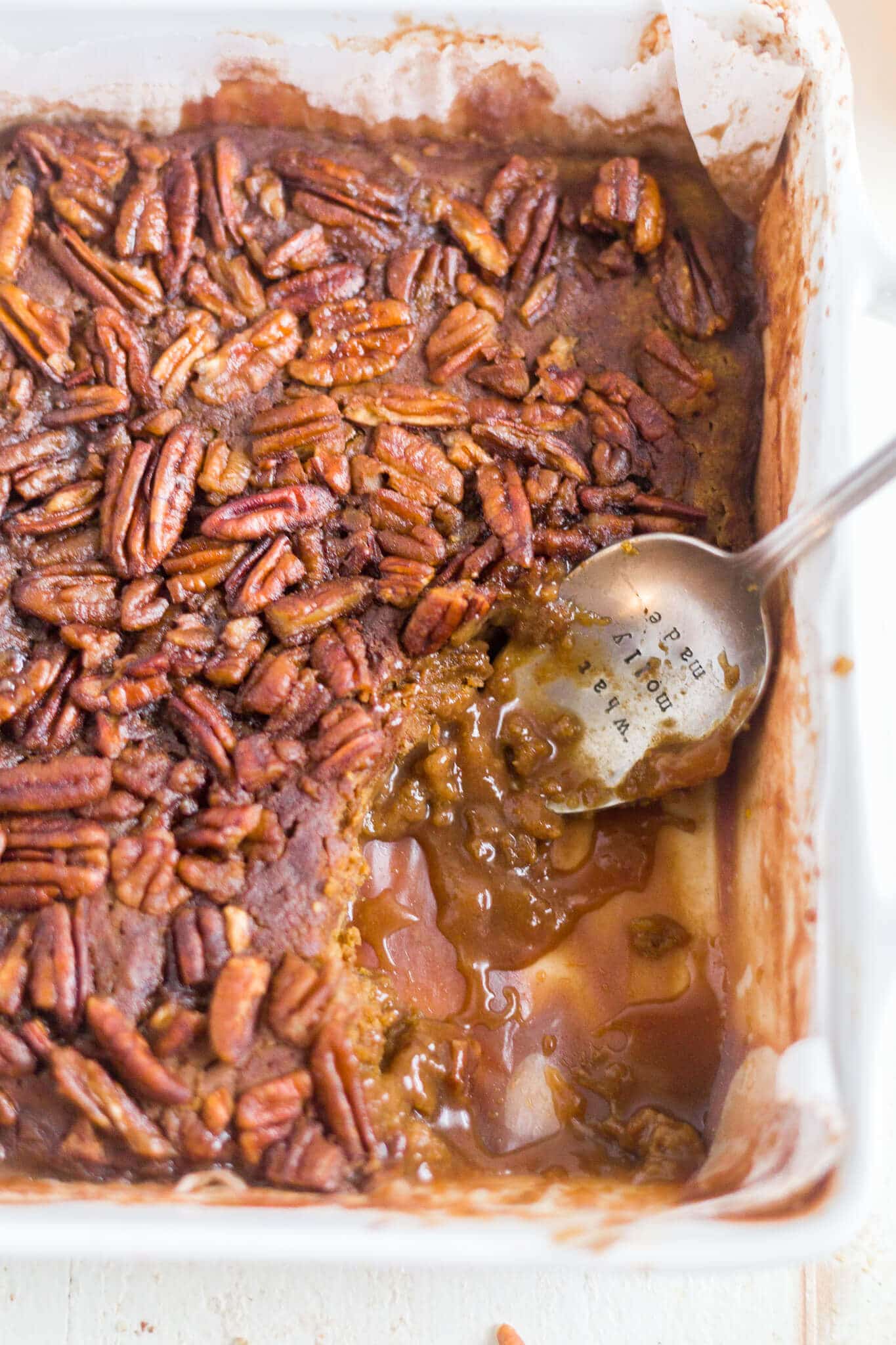 What makes a cobbler a cobbler?

A cobbler recipe is a dish that consists of fruit or a savory filling and topped with a batter, biscuit or dumpling. Typically cobblers have some sort of drop biscuit on the top that look like a "cobbled road." Hence the name cobbler.

This pumpkin cobbler recipe is made with a batter rather than a biscuit or dumpling. It's a thick batter that turns into a soft and caramely cake texture when backed with the water. 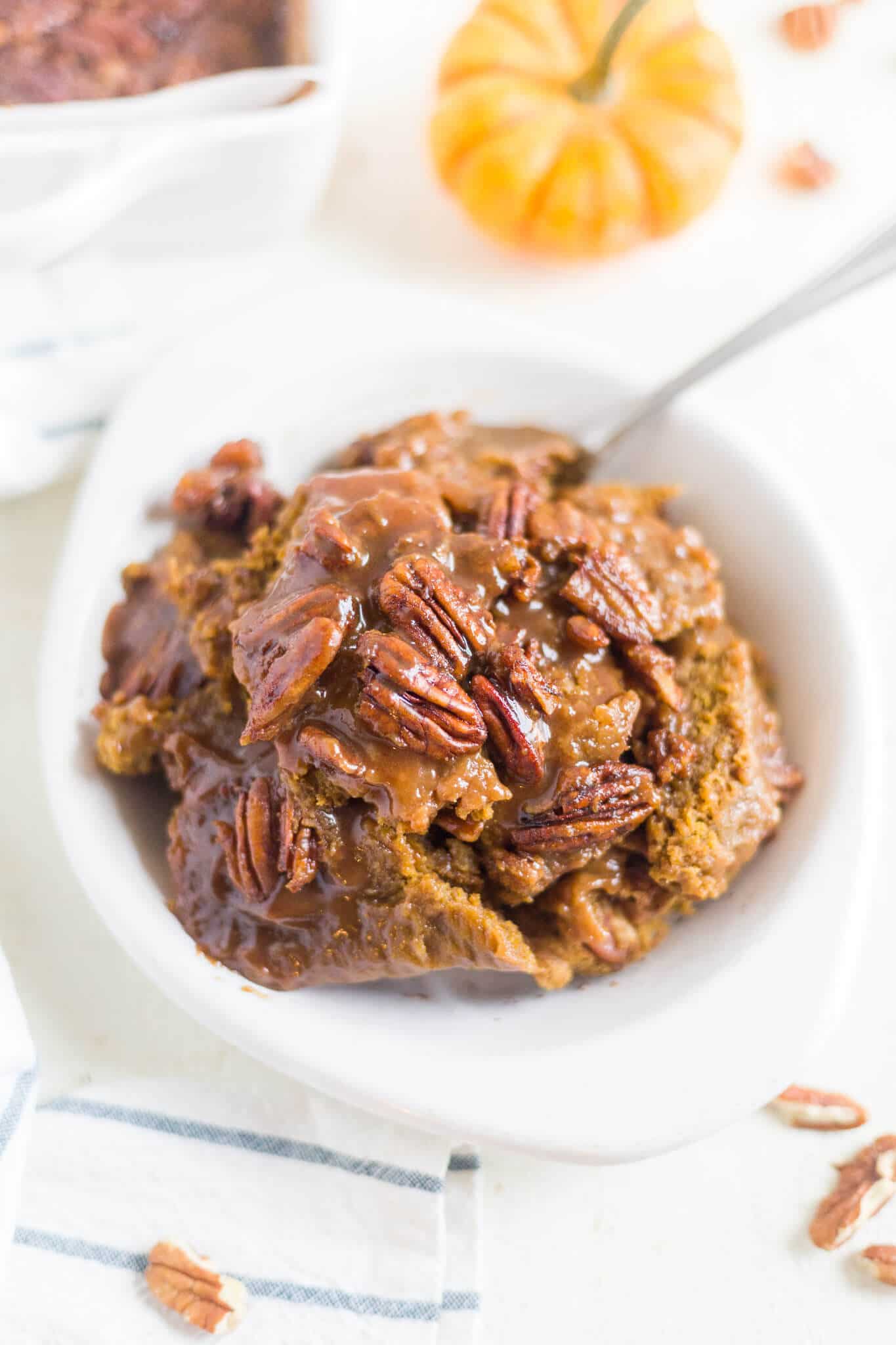 What's the difference between a cobbler and a crisp?

Crisps are very similar to cobblers, except they're topped with a streusel. Crisps traditionally contain oats where cobblers do not. For example, this healthy apple crisp recipe is made with gluten free oats. And this pumpkin cobbler recipe is made with flour.

How do you make a cobbler crust?

This cobbler crust is made with gluten free flour, coconut sugar, baking soda, pumpkin and milk. All of the ingredients are mixed together and spread in the pan.

Pour very hot water over the pumpkin cobbler right before baking. While it's baking and rising, the water will seep through the cobbler crust and create a caramel-y, pumpkin filling that's super moist and gooey. You'll be left with a soft and tender cobbler crust on the top. 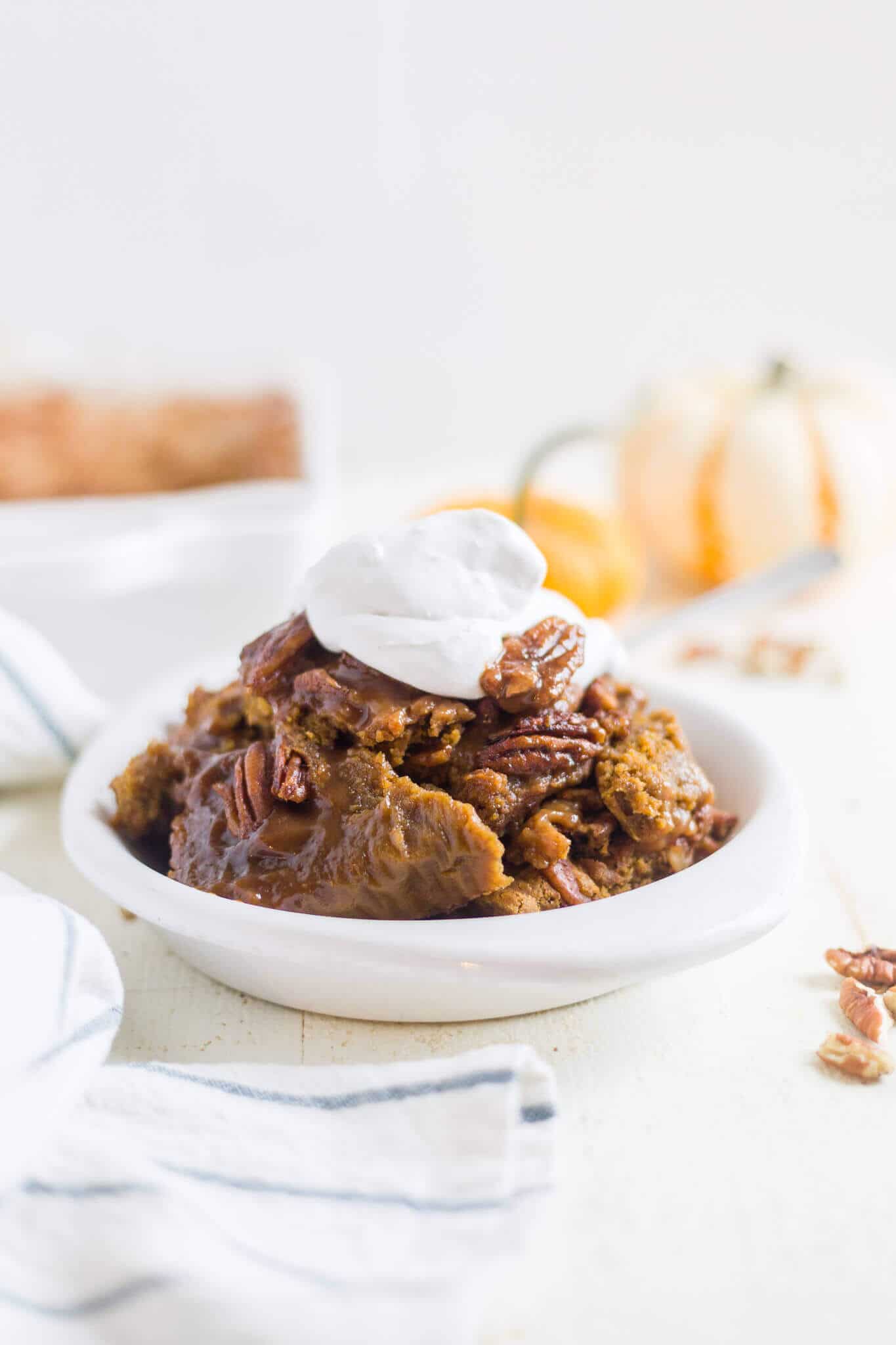 How to make pumpkin cobbler:

To make this pumpkin cobbler recipe, start by mixing together the batter. You'll combine the dry ingredients then the wet ingredients in separate bowl. Mix them together until you have a very thick batter. Spread it into a 9x9 inch baking pan lined with parchment paper and set aside.

Mix the coconut sugar, pecans, maple syrup and cinnamon together in a small bowl then sprinkle evenly on top of the batter in pan.

Next, pour hot water over the top of the pecans and batter. The water will sit on top of the batter because it's so thick, this is what you want. Do not mix the water into the batter!

Bake at 350°F for 40 minutes. The water will seep into the batter and create a caramel sauce underneath. Serve warm with ice cream or whipped cream! 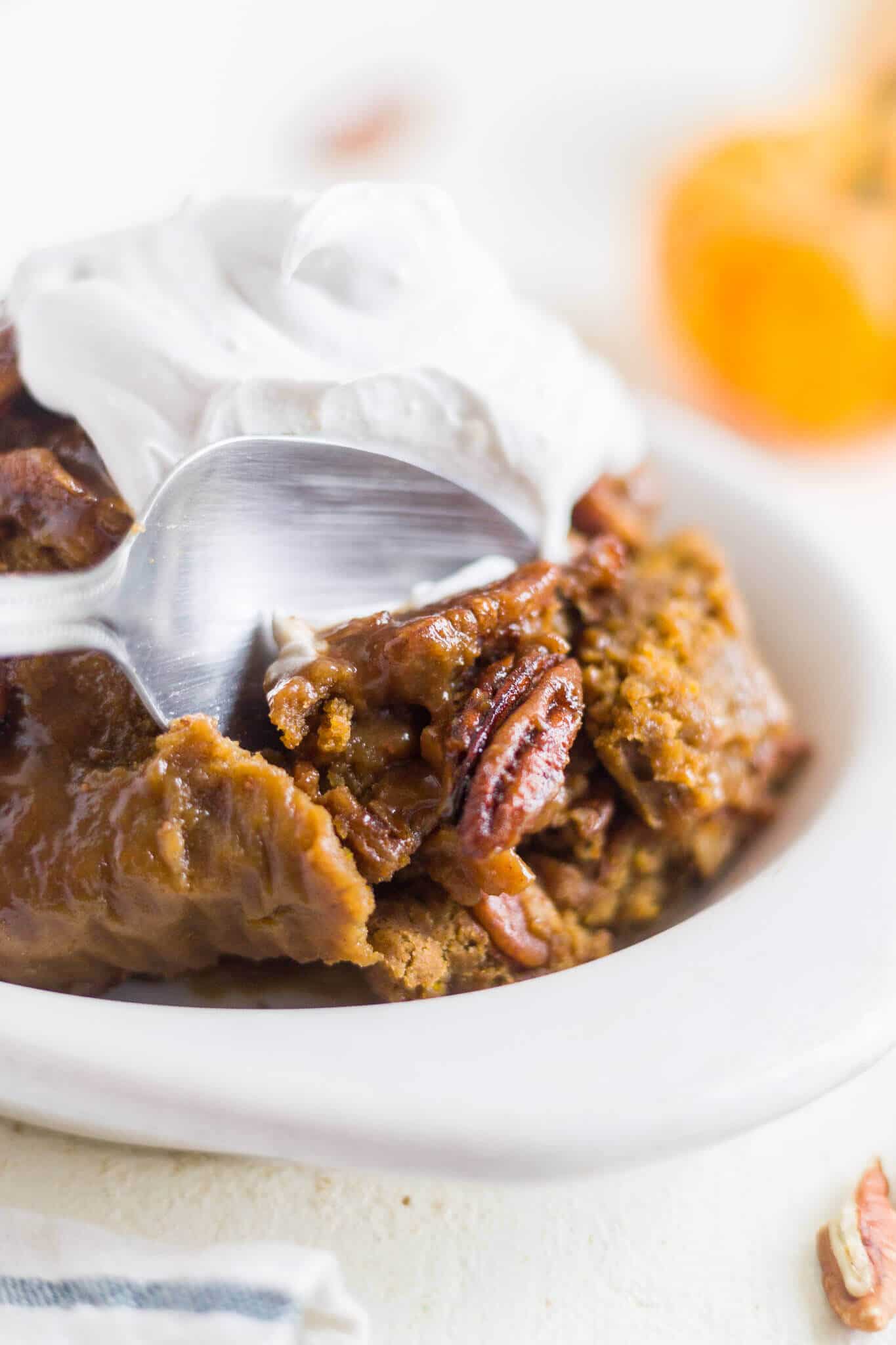 I love pumpkin cobbler because it's a different take on a Thanksgiving pumpkin dessert. You still get all the pumpkin spice and pecans, but if you aren't a huge pie person it's a perfect dessert.

If you make this recipe, don't forget to follow me on Instagram and tag me with @what_mollymade so I can see it and feature you! 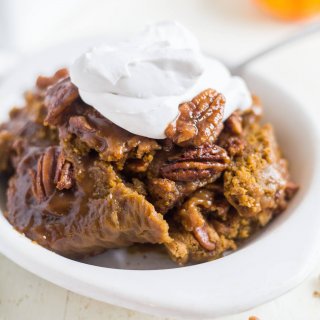 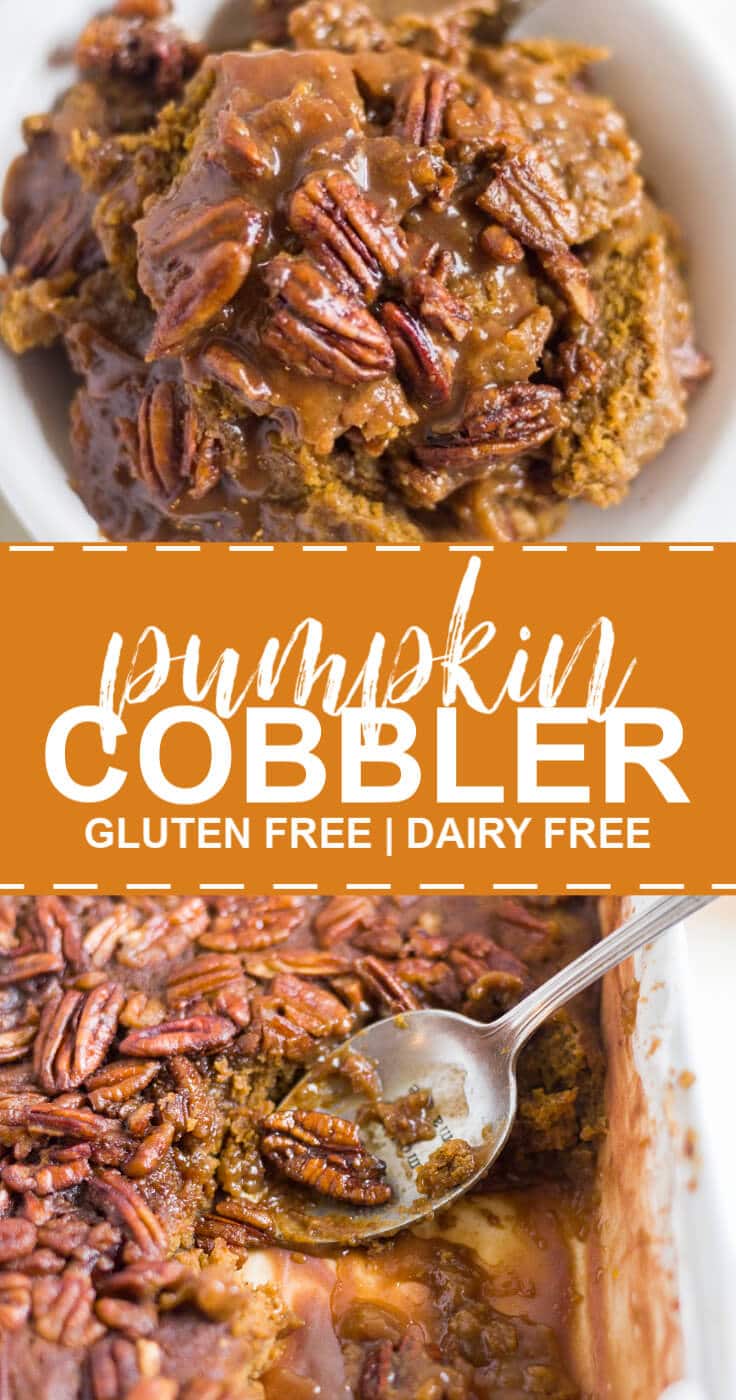